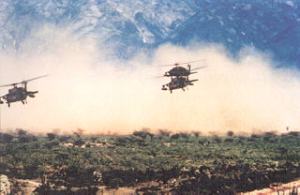 While in Haiti, a couple of issues arose for crew members. Being in a foreign country is an adventure in and of itself, but it can quickly turn frightening when your health is in jeopardy and you’re so far away from home.

The trouble started when one of the divers aboard the R/V Silver Seas, Laurie, got sick from some of the Haitian food she had eaten. There was a military base nearby that had a hospital inside, and she was sent there for a couple of weeks to recover. Surprisingly, no one else got sick from any of the food, but my dad Greg Brooks had an unpleasant experience of his own.

Operation Uphold Democracy was going on, which meant there were military forces all over the countryside, as well as in the harbor. (See image above) Many military bases had been constructed around the area, which were heavily guarded and armed. One evening my dad and some of the crew were coming back from the resort where Jean-Claude Ditmar worked, when my dad tripped and fell into some of the Concertina wire which had been set up to guard a military base. The barbed wire was nearly invisible in the darkness. This wire dug deep into his leg, leaving a large slice across the back of his calf. My dad’s friend and fellow crew member, Artie, pulled him out and carried him to the U.S. military base for medical attention. The soldier guarding it refused to let them in because of specific “orders”. It didn’t matter that my dad was losing blood fast, or that he was an American citizen and a Veteran. Artie angrily tried to reason with the soldier, but to no avail. Luckily, the Guatemalan army was stationed nearby and Capt. Juan Carlos happened to overhear this argument. He brought my father to the Guatemalan base hospital, where his wound was cleaned and a shot of penicillin was administered. This wouldn’t completely fix the problem, but it would keep him from getting infected for the time being. The Guatemalans explained that they weren’t supposed to let people into their base, but obviously this was an emergency and they were appalled that the Americans wouldn’t help one of their own.

After a few days, my dad’s wound was requiring some more attention. He snuck into the American base and convinced a nurse there to work on him. He joked with her that he was “a Concertina wire checker that wasn’t good at his job”. The nurse dressed his wound and explained that he really should go back to the States, as a flesh-eating disease was running rampant in Haiti. The doctor came in and discovered my dad there, and reiterated the fact that he really needed to go home. The severity of his condition was obvious, and no one seemed to be mad that he was there this time.

After Laurie was released from the hospital, the group set off for home. While my dad and his leg were alright and he escaped the flesh-eating disease, he still has a nasty scar from this trip to Haiti.