Hidden In The Reef 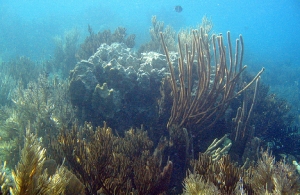 The next couple of days in Haiti passed by quickly. My mom, dad, and their friends continued to explore the country, but did not venture as far as they had the day they had their altercation with the soldier. They went to the market finally, and saw beautiful handmade crafts for sale. There were sculptures made out of wood and stone, and paintings of Haitian homes and landscapes in a gorgeous array of colors. The marketplace was full of people, selling goods and walking, coming and going from work/daily chores to home. The women walked with baskets balanced perfectly on top of their heads, filled with laundry or fruit and goods from the market. My mom was in awe of the culture. Despite the terrifying experience they had gone through days before, they were finding themselves really enjoying their stay in Haiti. It was eye opening to see how hard everyone worked, and how generous they were. While almost all of the Haitian people my parents encountered were extremely poor, they were willing to share.

On their last full day in Haiti, my dad and his friend Mel decided to go diving with another group of people from the resort. My mom chose to sit on the beach and write postcards to people at home. Haiti was extremely sunny and temperate, and she remembers the beaches having very soft sand and bright blue water that was almost clear. It was the perfect place for diving and for sunning yourself on the beach. As my mom sat and wrote her letters, she heard a commotion from the direction where the group was diving. She looked up to see my dad running toward her – awkwardly, because his dive belt was handmade with actual rocks tied to it! (There was no dive equipment for rent in Haiti at that time, so you had to be creative with the pieces you didn’t have). My mom said that my dad was very excited and out of breath when he reached her. He explained to her that he and the other divers had spotted a strange silver object in one of the reefs by the shore. After chipping the reef away, they realized the object was actually a 70 pound silver bar. Because the shore was being patrolled by the Ton Ton Macoutes, soldiers armed with machetes, there was no safe way to bring the bar back with them. After their near miss the other day, it was not a good idea to risk it. Instead, they hid the bar and vowed to return one day when they could pursue their find legally.

There were several divers there that day, and while they were all excited at the find, the majority of them did not think much of it once they left Haiti. It was all my dad could focus on, however. He continued running his swimming pool business, but in his spare time, he devoted many hours to research at the library. While they were all involved with finding the bar, only my dad would opt to return, though it would take him four years to do so. It seemed as though the other divers filed the bar away as something unattainable, or perhaps just a fun adventure they enjoyed while on vacation. The bar acted as something else for my father. It completely transformed his vision, and shifted his goals for the future. This was the catalyst for everything, and had this event not happened, it is likely that what we now know as Sub Sea would have never come to fruition.