Each day in London was even better than the day before. After our wonderful breakfast and even more wonderful English coffee, we would make our 15 minute brisk walk to the National Achieves. By the time we got there, we were energized and excited and the day would literally fly by. After about the third day, I felt like an old pro. I knew where everything was and how to go about ordering books for the next day. I was already wishing we were here for a longer time 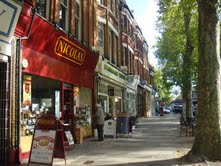 .
I think I can speak for Kathy when I state, the village of Kew was our very favorite spot the entire time we were there. The first time we walked into the village we felt like it was home. It consisted of only a couple of streets, but they were colorful and full of life. There was a mixture of shops, from a meat market, a florist shop to a boutique. Of course there were restaurants and pubs in the mix. But at the center of it all was the train station, called The Kew Bridge Rail Station. It originally opened in 1849. It was the heart of the village activity. There was a restaurant that offered dining either inside or outside the station. Almost everyone chose to sit outside. There were long picnic style tables that were almost always full. You could eat your lunch and sip a pint while watching the goings on in the village. It was typical to see many of the old timers sipping a pint and reminiscing. This became a favorite place for us, as we too loved to sit and people watch. We talked about buying an apartment over one of the businesses and coming each year to visit (hey, a girl can dream).
On our third morning in Kew, we knew we were moving to another hotel, so we were up early to pack. Again, we struggled to maneuver our luggage down the three flights of stairs. They let us store them in a back room while we went about our day at the Achieves. When we returned mid-afternoon, we hailed a cab to our new hotel, nicely named Coach and Horses. At first, I thought it was a hassle to have to move from one hotel to another and then back to the original one, however, I loved our stay at Coach and Horses. The room was beautiful with dark wood and rich colors. The pub, where we ate breakfast and dinner was so inviting. There was a huge wood burning fireplace that gave it a cozy and homey feel. It was a great place to unwind after a long day. We would usually order a pint and dinner and before long would strike up a conversation with one of the patrons of the pub. Most were locals that came on a regular basis and would notice when someone was new. Of course, once they found out we were American’s, they would barrage us with questions, especially when they found out why we were doing research at the National Achieves. Who isn’t a bit intrigued with shipwrecks and treasure hunting? It was a great way to pass the evenings and make some new friends.
One in particular truly stood out. He was a much older gentleman who was sitting alone at the end of the bar. I believe he asked us a question first, so we decided to move closer so wouldn’t have to speak loudly. By this time, I had had a few pints in me and was a bit chattier (if that is even possible). After some time of sharing stories, I could tell he was really intrigued with Kathy’s quiet and attentive manner. He was nice enough towards me, but I felt he thought I was a typical loud American. It probably didn’t help when I went on and on about what type of country doesn’t have face cloths. Really, I was just joking (you just have to know my sense of humor) but I don’t think he took it that way. Every question he asked or answered was directed towards Kathy, as if I wasn’t even there. I really didn’t mind as there were many other people close by to talk with. Every so often, Kathy would give me a look as if to say, “Help, I’ve had enough”. But, being the type of person she is, she would never hurt his feelings, so she stayed and listened all evening as he told her story after story. It has been three years since we were there, and this gentlemen still writes Kathy long letters and even sketched a picture of her from memory. What do I get? Nothing. 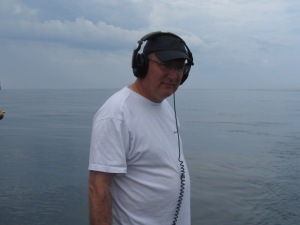 Filming from the Discovery Channel, Martin.

We had made plans prior to going to England, to try and meet up with our friends from the Discovery Channel. When we go to our room on the fourth day, there was a message waiting for us. It was from Martin, stating he had set it all up. Toryn, (who lived in London) would pick us up the next afternoon and drive to Martin’s home in the country. This would give us a chance to meet his wife Claire, and their sons. I had spent quite a bit of time with them both while they lived aboard the M/V Sea Hunter, so was really looking forward to catching up. As a matter of fact, Martin had turned 60 while he was living with the crew in America. Knowing this was a milestone birthday and being he was so far away from home, Kathy brought a cake and ice cream for him and we all celebrated aboard the ship. His wife was so appreciative that she called to thank us for making it a special day. She too, was looking forward to meeting the other women in his life. We knew this would be another highlight to our trip