The Journey to Haiti Begins

(This blog is about my past experiences living and working aboard the M/V Sea Hunter, a 220’ salvage ship)

It was truly amazing watching the endless cars and trucks loaded with supplies drive up the dock to unload onto the M/V Sea Hunter. Just when you think no one else is coming, another three or four vehicles were lining up. The crew and volunteers worked from morning to night to fill every nook and cranny on the ship. We had both cargo holds filled with pallets of water and other supplies. We boxed up clothing and food items. The boxes and the portable medical vehicle were starting to cover our entire deck.

Julia Cote and Stephanie Ferrante were volunteers that not only helped load the ship in the freezing cold, but also made endless phone calls soliciting money for fuel to be used on the trip. Since this mission had nothing to do with the Port Nicholson site, Greg Brooks (owner of Sub Sea Research, LLC) didn’t want to take anything away from the investor’s monies. Food and water had been donated for the crew and volunteers while they were on the relief mission to Haiti, so calls were made to local businesses pleading for help in the form of fuel.
Throughout those first few days, I did whatever I could to help out. You could find me unloading cars and carrying supplies onto the ship, making phone calls to solicit fuel as well as making meals and keeping the coffee pot full. Everyone was exhausted but willing to do whatever it took.
We all continued to watch the coverage regarding the earthquake relief mission. There were many organizations willing to donate either money and/or supplies. However, it wasn’t always getting to the people. Haiti is a country that is known for having a corrupt government and donors were weary that their donations weren’t getting to the citizens of Haiti. Greg and a few of the crew members had been there many times and experienced this first hand. So Greg and Captain Gary Esper devised a plan that would allow all of this donated aid to get in the hands of the people of Haiti. Instead of going directly to Port au Prince, we would go around the island to an area called Marigonne as they had a deep water dock. They also decided to bring along a member of the press to witness the trip. Bill Nemitz of the Portland Press Herald, volunteered to go. He would chronicle the day to day events throughout the entire trip from Portland, Maine to Haiti and back. We were happy with this decision as we felt this could be a huge help if things didn’t go right. (Little did we know that things were going to get really tough.)

Rick Woodbury, another volunteer for our aid trip to Haiti

Many people came up to Greg and Gary and asked if they could come along to help. I even had a few friends that wanted to go. Greg pulled the crew together to discuss what would be best overall. It was decided to allow Julia and Stephanie as well as two additional volunteers to go along. That was Rick Woodbury and Dan Kidd. They had been helping on the dock since day one and were genuinely serious about this mission. They both took time off from work all the while knowing they were not being paid from Sub Sea Research to go along. Of course they would get room and board but were expected to work hard and agree to no time frame. We didn’t know exactly how long this would take as we planned on stopping in both Boston and Miami to load additional aid. 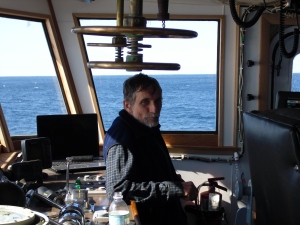 Dan Kidd, a volunteer and a true character.

Not only helping with the loading of supplies, I was kept busy shopping for groceries and making meal plans for our trip. We now would have a total of 14 people, nine crew, four volunteers and one member of the press. We had to rearrange the sleeping quarters to fit the additional members. Since there were only three women (me included) we all bunked in one room. The room only had a bunk bed for two so we decided to sleep in shifts. Since I would be mainly responsible for the cooking, it was decided that I would sleep during the night and Julia and Stephanie would take turns doing watch and sleep in the day. Now can you imagine three women and all their “stuff” crammed in a small room? I can assure you, it was a tight fit. However, I am good at organizing and found a place for all of our things.
With everything securely packed aboard the ship, it was now time to say our good byes and head to Boston where we would spend a day receiving more supplies from a few organizations there.
I was full of emotions when I spent my last night with my daughter Jen and granddaughter Lily. We are each other’s support and this would be my first time away from Lily for any extended time since she was born four years prior. She had been aboard the M/V Sea Hunter a number of times and she thought of it as her personal ship. She didn’t understand why she couldn’t come along. I tried to explain in the simplest terms where and why nanny was going away. Each time I would explain about the need for us to bring clothes and food, she would look at me strangely and say “Why don’t they just go to the store and get new clothes and food?” Out of the mouths of babes, if only it were that simple.

4 thoughts on “The Journey to Haiti Begins”