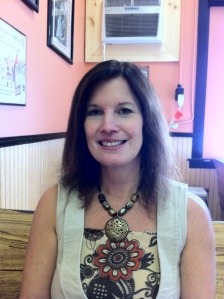 There are so many hard-working individuals employed by Sub Sea Research, and I would like to take an opportunity to give each one some attention. I plan on interviewing as many crew members and behind-the-scenes employees as I can, and doing stories focusing on that person and their role in the company. Today I am focusing on Kathy Brooks, my mother and Sub Sea Research’s Office Manager. She has been with the company since the very beginning. In many ways, she is the heart of Sub Sea. It’s with her support that my dad was able to set up the company, and keep it going for so many years.

She has been with the company since its inception almost 20 years ago. At first, her job consisted of dealing with finances and keeping records for the company’s accountant. This job has evolved over the years, and she has since picked up more tasks. Back when there was a physical office for Sub Sea, my mom would go to the office daily to answer calls and meet with people, including crew members, investors and those looking to get involved in the treasure hunting business. Nowadays, the business is run out of my parents’ home (though the ships, the Sea Hunter and the Son Worshipper, also double as offices!). She handles many of the business calls that come through, and frequently speaks to investors over the phone to give them updates. She still handles the company’s financial records and important documents. Every week, she writes out payroll checks for each employee. These jobs are detail-oriented and require a lot of attention and time. While it may sound like a treasure hunting company is all excitement and adventure, it still functions like any other company would, which means that all the shopkeeping still needs to happen. Thanks to my mom, it does!

That is not to say that my mom’s job is always boring. Oftentimes she gets to do research for the company, which means she gets to talk to interesting people or travel to exciting places (like to the National Archives in London with my Aunt Cindy!). My mom believes that the work she does is very rewarding, and she enjoys the connections she makes with the other employees of Sub Sea. She says: “The greatest experience I have had in this business is the emotion that I feel for each and every crew member who has ever worked alongside us helping us to get closer to achieving our goals.  I also have similar feelings regarding our supporters who allow us to work in such a small and interesting field of business.  Each success we have, each piece of red tape we conquer, gives us something to share and someone to rejoice with.”

There are many challenges that come up. In some circumstances, my mom is the second in command. When the ship is out to sea, it is entirely up to her to deal with any issues that arise at home. One of the scariest things she had to work to resolve happened when Sub Sea was working in Haiti. My mom received a phone call saying that the Haitian Coast Guard was seizing the ship and arresting my dad and the rest of his crew. Though she was many miles away, it was up to her to save them. That day she made many calls to people in positions of power that could potentially help. She ended up speaking with Bill Vail, who worked in Senator Susan Collins’ office. He was able to contact the American Embassy, who put a stop to the arrest and put a halt to the dangerous situation. There have been other issues that have arisen, including an office fire, a boat sinking, a partial sinking, and many instances of red tape put up by governments. My mom has always worked courageously alongside my dad and the rest of the company to resolve any issues. There is no way it could have been done without her. Because she is not on the front lines, so to speak, it may seem like she is not one of the frontrunners of the business, but every good business has someone who works behind the scenes to make everything happen, and that person for Sub Sea Research is Kathy Brooks.

One thought on “Spotlight on… Kathy Brooks”