(This blog is about my experiences working and living aboard the M/V Sea Hunter, a 220’ treasure hunting ship)

Finally, things were falling into place. With just one last inspection from the US Coast Guard, we would be on our way. Kevin Garthwaite, the new (stand in) captain had recently arrived and agreed to pilot the Sea Hunter and crew to Haiti with its 200 tons of aid.
The weather was overcast and the oceans were kicking up as we sat at anchor off South Beach Miami, awaiting the US Coast Guard. Everyone was on pins and needles praying they wouldn’t find another infraction, but instead give us the final approval to leave. It had been about a month since leaving Maine and we were tired of waiting. We desperately wanted to get to Haiti and deliver our donations. Greg was in touch with the people of Hope Village in Haiti where most of the donations were headed. This was an orphanage that had grown from about 600 children to 800 since the earthquake. They were in dire need of supplies. They were praying for our speedy and safe voyage. I couldn’t imagine that after all we had been through that the Coast Guard would stop us from going.

The waters were choppy when they arrived and rafted up next to our ship. Two officials from the Coast Guard boarded the Sea Hunter and spent a few hours inspecting the work they had required we do. They next observed as the crew went over some important drills. I tried reading their faces but it was impossible. They were all about business. When they were through, they met privately with Greg and Kevin (the new captain) in the pilot house. They went over their list and did have a couple small things that needed attention, but overall they were pleased with what we had done and gave us permission to finally leave and head to our destination. It was of course, the best news ever!

While all of this was going on, we unfortunately had three people leave the mission and head back to Maine. One was a crew member who had family issues and the other two were volunteers. Though it was sad to see them go, as they had been through so much with us to this point, I wasn’t going to let that get me down. I, along with the crew had to keep our focus on the purpose of this trip. We had accomplished a lot and still had much to do.

I was so ready and wanted to haul the anchor right that moment and leave, however, good old Mother Nature had other plans. The seas were fairly strong and we had our ship’s tender, Mini Me still in the water. We were unable to raise her onto the Sea Hunter with our crane as it was too dangerous. The good thing was the extended forecast looked great. The weather would be calmer by morning and would stay that way for our 2-3 day ride to Haiti.

Some either slept like logs and others hardly slept at all that last night in Miami. We were all anticipating our trip to Haiti. I was just too excited lying in my bunk going over all the happenings that brought us to this point. Though some of it was physically tough and emotionally challenging I wouldn’t have changed a thing. I’m a firm believer that things happen in the right time (maybe not the time we want) but the time they are supposed to. It all felt right at that moment as I closed my eyes imagining what the next step of our trip would bring 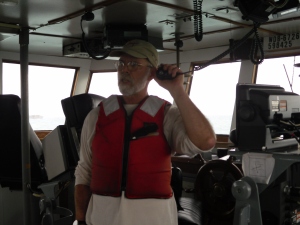 Capt. Kevin Garthwaite telling the crew we are finally heading to Haiti

It seemed like I had just closed my eyes when Greg woke the crew. It was about 3 or 4 am and the seas had calmed to a quiet pause. We had to load the tender aboard and we would then be ready to head out. I was more than happy that morning to be up early and cooking a hearty breakfast. As each crew member sat down to eat you could feel their excitement. Dan Kidd (a volunteer) was extra jubilant, strumming his banjo and making up lyrics. I was savoring those moments in the galley, as I knew we would face some additional hurdles once we got to Haiti. Greg had been to Haiti numerous times and shared some of his personal stories about the inefficiency of the Haitian government. How the so called officials all had a hand out when you wanted to get something done. Now, since the devastating earthquake, I was hoping that things would be different. That they needed the supplies we had and would welcome us with open arms. It only seemed reasonable that a government would want to do whatever they could to help their own. Unfortunately, I was soon to learn differently.