A story by Ashley Brooks 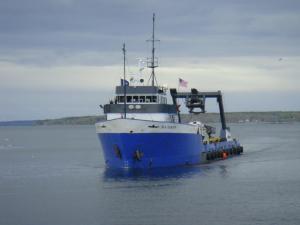 In my last post I talked a bit about the Mini Me and all the hard work the Sub Sea crew had done to fix up this tender, along with the much larger Sea Hunter. This was a process that took many months to complete. My aunt Cindy has written about it in many of her posts, as she was one of the original crew members for the project. The job was finally completed in the spring of 2009. The M/V Sea Hunter was purchased down in Houma, Louisiana and the entire refurbishing project took place there. Since almost all of the crew is from Maine/New England, it was exciting for them to finish, because they knew their friends and family back home would finally get to see all their hard work.

The ship had to begin the several day journey through the Gulf and up the east coast of the US. Meanwhile, we were preparing up in Portland for the ship’s return. News crews were notified and family members were informed of the upcoming day. Many of us hadn’t seen our friends and family for weeks or even months in some cases. We were very excited to reunite with them and see the product of all their hard work.

The ship showed up on a windy day in May of 2009. We were all waiting at Vessel Services in Portland for the M/V Sea Hunter to pull into port. When we finally caught sight of the 220′ ship the news crews began filming and everyone edged forward to get a glimpse. We had seen photos of the ongoing project and it was amazing to see how far the ship had come from its early days. The ship had been painted in vibrant blue and white with a bold SEA HUNTER emblazoned on the side. Many of the crew members were waving to us as they began readying the ship for docking.

At that point, we were able to hug family members and the crew was able to stretch their legs on land. The news crews began doing an interview with my father, and my mom and I got to go onboard. She had been on the ship a few times before when she went to Louisiana to visit my dad, so she was able to show me around the large ship with ease. It was awesome to see the work that had gone into the vessel, and to finally meet Nine, the ship’s cat!

While it wasn’t long before the ship had to go south to Massachusetts to begin work on the Port Nicholson wreck, it was nice to see the ship in Maine. It’s good for morale when the ship returns to the crews’ home. They get to see their loved ones, and show off all the hard work they’ve been doing. There have been several more returns like this one, but since this was the first time the Sea Hunter made it to Portland, it was one of the most special times.