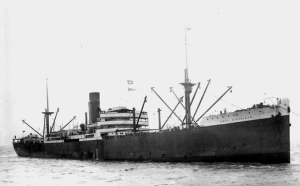 The SS Port Nicholson is the current target of Sub Sea Research. The ship’s history is a fascinating and tragic one, and I have written about it on a few different occasions. Today I am going to focus on the history of the company that owned the Port Nicholson. While the story of the ship’s sinking is an interesting tale, with the question of legality and shipwreck finder’s rights coming up, it is important to look at the origins so as to know the full story.

In 1914, four separate companies merged to create the Commonwealth and Dominion Line, a ship line that would later be known as Port Line, one of the most renowned marine companies in the early 20th century. The four original companies involved in this partnership were Tyser & Company, Star Line (James P. Corry & Company), Indra Line (T.B. Royden & Company), and Anglo-Australasian Steam Navigation Company (William Milburn). These ship building companies were all well-established at the time of the merger and were all working in trade with New Zealand and Australia. At the time of the Commonwealth and Dominion Line’s inception, the group owned 23 steamers and were working on 2 new ones. With the forming of this super-company, not all of the other fleets were dissolved. Each of the four original companies maintained a fleet of its own, though each also merged several steamers with the newly formed company. These steamers were painted with the Tyser colors, as he had been elected Chairman of the Board for the company. The Tyser colors – buff colored with a black top and gray hull – became a universal way of recognizing Commonwealth and Dominion vessels.

World War One was soon upon the company and by the end of 1914 seven of the original 25 ships were lost through enemy action. Two additional ships were lost by collision. New ships were built throughout the war years, and in 1916 the Board decided to name all their new ships with the prefix “Port”. The first ship to be named in this manner was the Port Darwin.

On the 11th of May 1916 an order for three ships was placed at Yard Nos. 487, 488 and 489 in Hawthorn, Leslie. One of three vessels was the named the Port Nicholson, but it is not the same as the vessel that Sub Sea Research is currently searching for. It was constructed at the same time as the Port Adelaide and the Port Kembla. The first Port Nicholson was sunk by a mine during travels from Sydney to Dunkirk.

With the loss of so many of their ships, the next several years following the end of World War One were spent crafting eleven new steamers to join the fleet. One of these was the famed SS Port Nicholson, which shared the name of one of its predecessors. The ship was completed in 1919. It was common for the Line to name new steamers with the same title as previous vessels which had perished or been destroyed. In going with the theme of their naming system, they tended to use the names of ports their ships actually delivered cargo to, and in that way, there was only a limited amount of names to choose from.

Over the next decade, the line continued business as usual. New steamers were constructed and trades and voyages were completed. In 1935, the line completed a sale which would grant them the ability to travel to Australia via the United States. This came at a great time for the company, which had been affected by the Great economic Depression over the preceding years. They renamed themselves PORT LINE LTD, and paycuts made to staff were lifted. Things seemed quite promising for the company.

Next time I will discuss the changes World War Two imposed on the Port Line.

One thought on “History of Port Line Volume 1”