(This blog is about my experiences working and living aboard a 220’ treasure hunting ship, the M/V Sea Hunter)
We were finally coming to an end of the donated supplies. The cargo holds were about empty of their food, water, clothing and medical supplies. Day after long hot day, the crew of the M/V Sea Hunter, the volunteers and the Haitian people had offloaded over 200 tons of aid. It had been delivered to the orphans at Hope Village and to the people of Les Cayes.

As my eyes scanned across our huge deck, (which was normally pretty clear) all that remained were ten 20’ medal containers and mounds of trash. Over the course of a week, I couldn’t tell you the number of people that had come aboard, each leaving a bit of trash behind. As I witnessed firsthand, most Haitians dispose of their trash by just tossing it to the ground, no matter where they are. And being aboard the Sea Hunter was no different. I never thought I would see our beautiful ship look this bad. 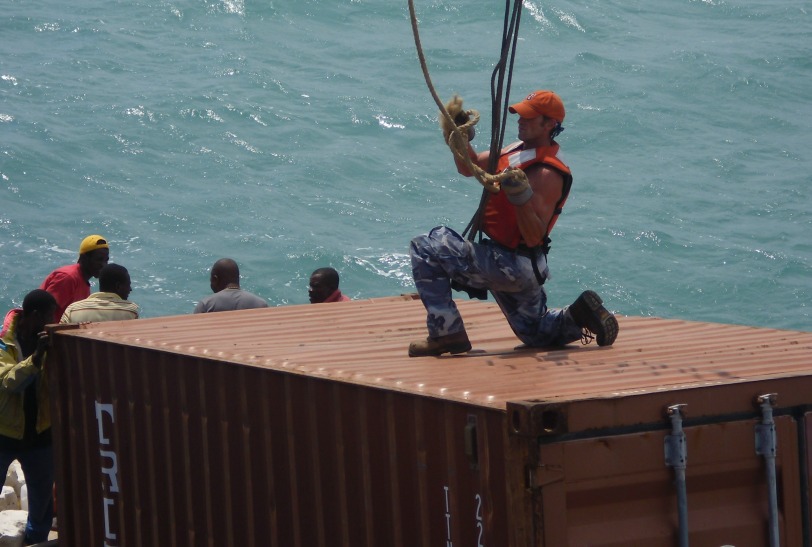 Alex hooking the cables to the 20′ container

But first things first, we had to offload the ten containers. I don’t know when it was decided, but the decision had been made that the containers were also going to Hope Village (the orphanage). They would be used for a variety of things; such as classrooms, offices or storage. When I inquired how this was going to be accomplished, my mouth dropped to the ground when Greg explained the process. The plan was to attach cables to the four corners of the containers, lift it with the ship’s crane and swing it over the side to eventually and carefully lower it into one of the Haitians boat. From there, they would take it to shore where it would be trucked to the orphanage. WHAT? HOW? I had a million questions. 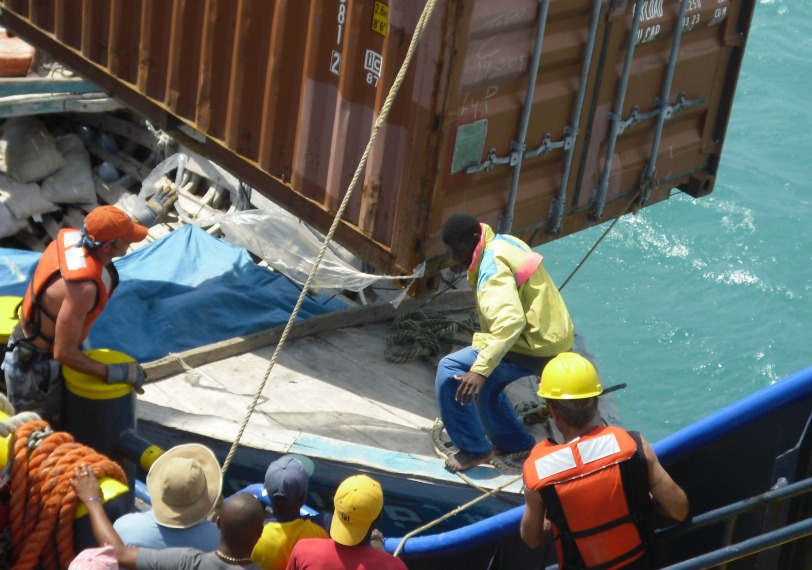 Alex taking control of the offloading of the containers

I suppose this kind of thing is done every day around the world, however, for the couple of weeks I had been in Haiti; I had never seen a boat I thought was strong enough or even large enough to accomplish this feat. By the look on Greg and Gary’s face, they had their reservations too. Brian Ryder (chief engineer) didn’t seem to have a problem with it at all. A piece of cake he said. Well seeing is believing, and it was all to happen the next day.

After breakfast the next morning, all crew was on deck ready to start the day. I quickly got my things done inside, grabbed my video camera and headed to the fossil deck. I didn’t have a good feeling about this but like a car wreck, I had to watch. I said a silent prayer asking for a miracle, that we would complete this last mission without anyone getting injured.

Of all days, this wasn’t the one you wanted any sort of wind. Any other day would have been perfect, but once again, Mother Nature had her own mind. It was blowing and didn’t look like it would stop anytime soon. As Alex (crew member) climbed to the top of the first container I looked over the side at the awaiting boats. To my untrained eyes, it didn’t look like it would fit in any of the three or so waiting boats, but I had to figure that someone had done some measuring and planning.

When the first container was securely hooked on all four sides, Alex raised his hand to Brian seated in the crane and gave the motion to begin. There was no doubt in my mind, that at that very moment, everyone held their breath. Slowly the cables became taut and the container was lifted a few feet off the deck. Some of the other crew had ahold of ropes that were secured to the container so as to help control its movements. Once it was stabilized, Brian lifted it up even higher. As he carefully swung it over the edge of the ship, the wind caught it and it started to swing back and forth. My stomach was in knots. Just below was a boat with four or five Haitians looking up at this huge container dangling about 10 feet above their heads. I don’t know how they didn’t panic, because I sure would of.
All of a sudden, Alex jumped into the awaiting boat below to try and grab one of the dangling ropes. I could hardly stand to watch as one mistake could be deadly. Thankfully he got ahold of the rope and helped to steady the container. This allowed him to direct it into position as Brian lowered it into the boat. 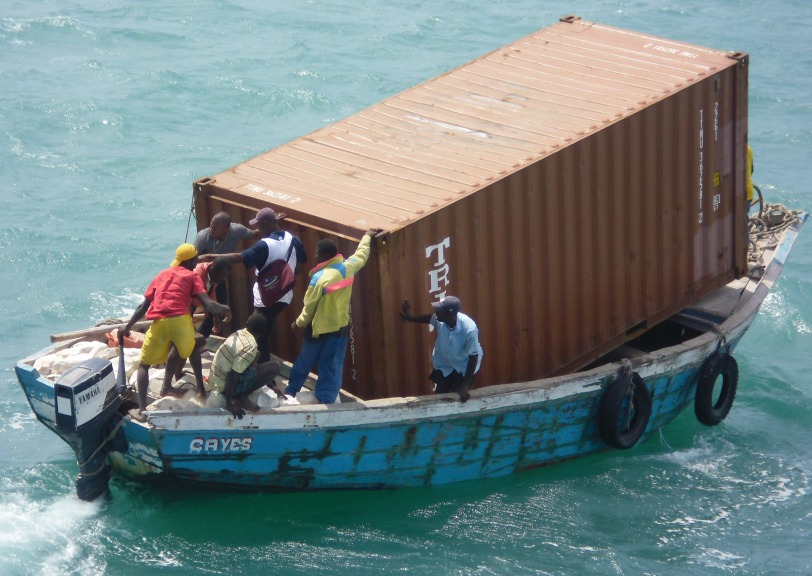 The first of ten containers to be taken ashore

With a huge sigh of relief (from everyone) the container fell right into place and fit perfectly (though tightly) into the waiting boat. Even the guys in the boat were shocked. All of us on deck broke out in a round of clapping. I was truly amazed! Once again, the crew did what had to be done and I, along with the others was deeply impressed! One down, nine more to go.

(If you want to learn more about Hope Village or feel inclined to help in any way, please check out their website at http://www.freethekids.org)

One thought on “Another Tough Feat Accomplished”