I recently asked the crew to share some information about themselves. With their answers and what I’ve observed working and living with them, now you can get to know them a little better.

Brian checking out the position of the containers

About 12 years ago, while in the Old Port area of Portland, ME, Brian Ryder and his partner was looking for some type of work he could provide with his tugboat. He came across the office of Sub Sea Research and his curiosity got the best of him. He strolled in and introduced himself to Greg. After speaking for some time they realized they had common maritime interests. Learning that Brian had worked on previous ships and once owned a 64’ T boat, Greg thought he would be a good addition to his crew and offered him a job.

Brian is the Chief Engineer for the M/V Sea Hunter. That is no simple task, as a ship that is 35 years old needs continuous maintenance. With the help of the 2nd engineer they keep everything in working order. Each day can be completely different when you work in this department. You never know from one minute to the next minute what you may have to work on. You may be right in the middle of one project, and in a split second go onto something else that requires your immediate attention. One day he may be working on the ship’s generators making sure they are fully functioning. The next day he may have to transfer fresh water from one holding tank to another. Brian is also in charge of keeping track of the fuel. When it starts to get low he calls around to find the best deal and coordinates the process when it is delivered and pumped into the ship. That can be a dangerous process if you don’t pay attention. Anything electrical also falls into his responsibilities, including the maintenance on our rov (remote operating vehicle).

Brian is also one of two crew members that run the ship’s crane. This might be to lift Mini Me (ships tender) into the water or pick something heavy up from the dock and place it onto the deck. While in Haiti, Brian did an excellent job picking up the ten 20’ containers off the deck and placing them precisely into smaller boats. This was done on a windy day while the ship was anchored offshore. Believe me, not an easy feat!

Brian has medic training and while working with SSR in Haiti, he had to use his skills on a few occasions. When the Port Nicholson project is over, Brian has a couple different plans with his share of the money. Of course taking care of his family is on the top of the list, but he also would like to start a nonprofit in Maine helping single parent’s better care for their children. Another project would be to invest in a floating medical ship that works in both Haiti and the Dominican Republic.
Though he misses his family while away, he has their full support as they know this is what he loves to do. When able, he speaks with them either by Skype or on the phone, sometimes a couple times a day. 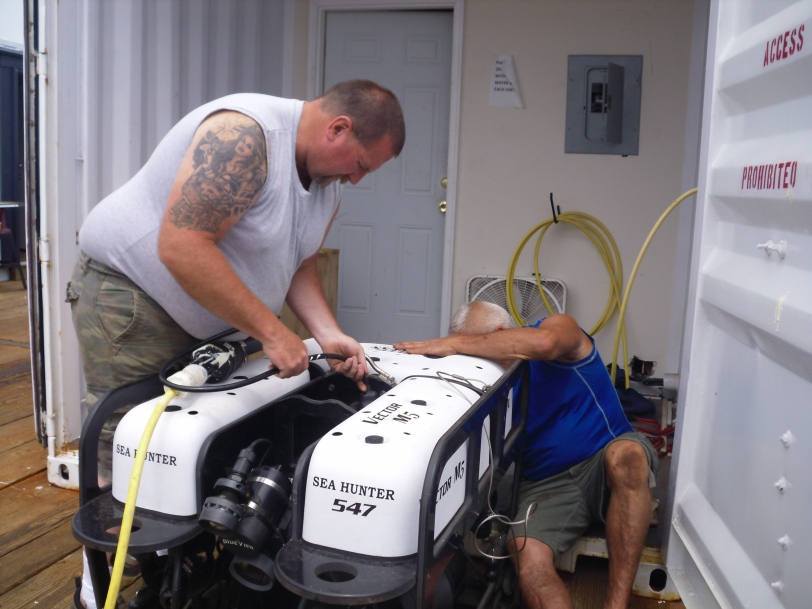 Brian working on our rov

Depending on the situation, Brian can be both gruff and a teddy bear. When he feels strongly about something he will stand his ground. He and I are both very opinionated and passionate about certain topics. Because of this, it has led to some heated discussions between us. However, we never let it get in the way of work. And whenever I need help with some of my own personal things, like my computer or new smart phone, Brian is the one I go to. I have no patience or mechanical abilities for these type of things, so I just ask, ”Can you make this work?” And lo and behold, he fixes it every time.

(In my last post I stated Captain Gary Esper had been to Haiti twice. That was an error, he has been to Haiti over ten times working with Sub Sea Research)