It was pretty easy to get into the flow of life on the Sea Hunter. Up, dressed and in the galley by 6:30. I’d pour myself a cup of Louisiana’s ” Community ” coffee, (a great coffee) catch a little of the local news and chat with whomever was up, which was usually Greg and Gary.

After breakfast there would be a meeting. We would discuss what had gotten done the previous day, who had done what and prioritize that days work. These meetings could get quite heated at times. Many times the blame game came into play. When you have a group of people living in fairly close quarters, working in the hot sun all day, you are bound to see tempers rise. It didn’t take long to acclimate to the personalities aboard the ship.

The following are the original crew members and my early impressions:

Dave- mate (hard worker, talented in many things, fabulous photographer with a twinkle in his eyes)

Matt- mate (young, long head of dreads, could tie any knot you requested, loved the ladies and sleeping)

Along with the crew, we contracted some works from the company that owned the shipyard where we were docked. They were hired to work on our crane. They were all local guys with accents to boot. I had previously lived in both Florida and Georgia so thought I was use to southern slang, but nothing compared to these Louisiana guys! I would have to ask them to repeat themselves more than once.  The speed of their work was also definitely southern (no offense to my southern family and friends).  But all in all, they were a great bunch of guys. We were the closest to one they called “Turtle”. He was a bit shy but always had a smile or something funny to break up the day.  A few Sunday’s prior to my coming, Turtle invited some of the guys over to his place to drink a few beers and play music. Turtle was a really good drummer and Gary played guitar. After some music, good food and drinks, one of the other guests offered to give the guys a tattoo. I guess that didn’t go over very well with Greg. He was not impressed. He expected his crew to look professional, and to him, tattoos were not professional.  I heard the story from both the guys and Greg and was thankful I was not there when it originally happened.

If you read my first post, you will remember my saying that when Greg called me to offer me the position, he said we would be done and leaving for Maine within a couple weeks. That, I soon found was a running joke amongst the crew. They were originally told the renovations would take no more than a couple months. They had already been there four months. When I questioned Greg about this, he assured me that it would only be another couple weeks (by that time, it had been two weeks).  My two weeks would eventually end up being six weeks. I would soon learn that things on a ship almost never go as expected!

The time went by fairly quickly. My days were filled with planning meals, shopping for food, cooking, cleaning, and helping around the deck. On my downtime I would be either reading, on my computer, watching movies, exploring the yard and sometimes hanging with the guys and Turtle in one of the out buildings. We would have a few beers, sometimes play music and talk. It felt good to relax, exchange stories and really laugh. They had some great stories. Though Greg never said anything, I had a feeling he really didn’t appreciate us hanging out like that. However, I believed we needed to let off some steam after our long hot days. Plus, we were far away from anything and the only vehicle was a company one, so what else were we to do.

Snake slithering on the water 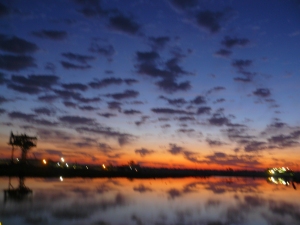 There were two dogs that lived on the property. They were large and intimidating looking but truly were the sweetest things. Meathead was my favorite (can’t remember the other ones name). They had been born and raised in the yard and basically tended for themselves. The crew took an instant liking to them and so most nights either me, Greg or Alex would feed them scraps from dinner. They never ate so well. It wasn’t unusual for them to hang around with us at night in the building. I always felt safer knowing they were around. When I would leave to walk back to the ship it would be pitch black outside. The only lights were from the ship. I would have to walk quite a distance and that could be scary. If you have never spent time in the south you have no idea how huge the bugs could get. Not to mention alligators, wild animals or snakes (my imagination would go crazy). So I was grateful when the dogs would tag alongside me until I reached the ship. On more than one occasion I would hear a noise in the nearby brush. I would instantly stop and try not to panic. Both dogs would sense my fear and off they would go to get whatever “monster” was hiding.  I really believe they saved me on more than one occasion.

(bottom picture is the night sky off the deck in Houma, LA  taken by Dave St. Cyr)