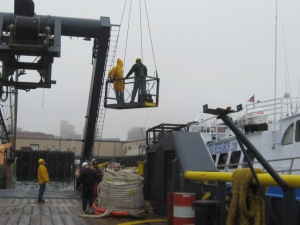 Working on the A-frame in the rain

With the new crew on board, we were making headway. The most important piece of equipment that we needed working at its best, was the A-frame. It was permanently attached to the stern of the ship while in Houma, however, it was not working to its full capacity. The A-frame stood straight up from the back deck and could extend out at an angle. There was over 700’ of cable attached to it. The purpose was to extend the cable, which was connected to a huge claw that would be able to drop the 700’ below. It would then pick up boxes or tear pieces of the ship apart. The problem was the claw wasn’t getting enough power to fully open and hold anything in its grip. Without this working perfectly we couldn’t even think of working our site, so these early days were concentrated on the claw.
Anyone who lives in Maine knows that May can bring either warm sunny days or rain. Well, let me tell you, we got the rain and it was not a warm rain. The weather report was saying cold rain for the entire week. I can honestly say, this was a miserable time, especially for the guys. Most of the work that needed to be done was outside on the deck. Greg got everyone some rainwear to help keep out the cold. Though it helped slightly, the rains were heavy and they were soaked within minutes. I, fortunately, was inside staying busy, keeping the coffee and cocoa hot and baking treats to help keep their energy up. I was constantly wiping the floors and seats as they were wet with rain and grease (a constant on a ship). This slowed the working of the A-frame, however, the weather on the site wasn’t cooperating either.

The second and third week was the same as the first, nonstop rain and cold winds. We tried to stay positive and upbeat, but for those who have worked outside in the cold rain for weeks, know it can take a toll on you. Overall the attitudes were still high, but I could sense a small shift. All we needed was some sun and a few good days at the site. Everyone was eager to get to the site and see what we could do.
We received word one of the cameramen from Discovery was flying in from England the next day. The second cameramen wouldn’t be coming for another week. We had all been joking around about being filmed. We had some really big personalities on the ship and I wondered how they would be portrayed. Greg talked to us often about this, and though he wanted us to be ourselves he warned us to pay attention to our colorful mouths. We were going to be on film and he didn’t want every other word to be bleeped out. I knew this would be a tough one for most, I included. After all, most of us talked like sailors. We decided to hold ourselves accountable and would put $1.00 in a jar for each time we cursed. That jar was about full the first day, so we changed it to a quarter and only for using the “f” word. I am embarrassed to say, that filled quickly too. Greg was not impressed.
The next morning I went to pick up the cameraman. I was to meet him outside the Regency Hotel in Portland where he had spent the night. When I pulled up to the front of the hotel, out came an older gentleman with a safari hat on carrying a couple suitcases and camera bag. He introduced himself as Martin and explained he needed to return his rental car before heading to the ship. He was not sure on the directions so I told him to follow me as I knew right where it was. We had to drive through town which was quite busy. After checking my rearview within a few blocks, I noticed he was quite a ways behind me, so I slowed down. Once he caught up, I preceded the speed limit. It didn’t take long and I lost sight of him again. I pulled over and waited until I caught a glimpse of his car and then pulled out in front of him. I noticed he had both hands on the wheel and was gripping it a bit hard and he looked uncomfortable. It was then it dawned on me, he was not used to driving on American roads. He was from England and it’s completely different. Once we got to the car rental shop, Martin paid up, put his bags in my car and hopped in. He looked squarely at me and says, “You Americans drive like a bat out of hell.” I liked him and knew he would fit right in.

One thought on “Spring Rains”