Our First Trip to the Site 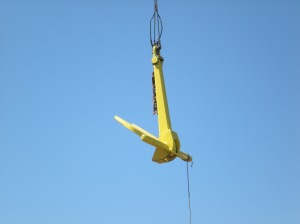 Greg and Gary had been checking the NOAA site a couple times each day to find a weather window so we could go to work. If that first summer taught me anything, it’s that we were controlled by the weather. We could work on the ship at the dock in bad weather, but working our site was a different matter. First, it took about ten hours to reach the site, so we needed three to four days of calm weather to make it worth our while. Another thing I learned was to not compare the weather on land to what was happening on our site. It could be sunny, warm and no wind on land, but a completely different story at the site.
The waiting finally ended, we got word that it looked good and we would be heading out early Monday, July 20th. After all this time, we could finally do what we had been training for. You couldn’t of found a more excited bunch! Sunday I shopped and filled the galley with food. The crew also shopped for treats and incidentals for themselves. Even Nine could tell something was happening. He was getting stronger each and every day since leaving the vet hospital. Thankfully he didn’t have to lose his tail, but would have a permanent crook at the end.

It was a bit foggy when the deck crew lifted the heavy rope that held the M/V Sea Hunter securely to the dock. The Son Worshipper was idling in the harbor waiting for us. I watched the entire process from the pilot-house. One guy would be on land to lift the heavy rope from the cleat and throw it to another guy on the ship. They would communicate by two way radios which are a life line on a ship. Even I had a radio. Gary had plotted a course which allowed whomever was at the helm (when he took a break) to continue in the right direction. It was fairly easy to follow, as there was a screen that showed the exact location of the ship and the direction it was going. All you had to do was follow the line on the screen. You could steer the ship two different ways, by the helm (large steering wheel) or a small knob on the dash. By slightly turning the knob left or right you could change the course of the ship. We all got the opportunity to steer the ship. I can’t explain the feeling you get when you are sitting in the captain’s seat, monitors lit up around you and all you see for miles in any given direction is the big beautiful ocean! 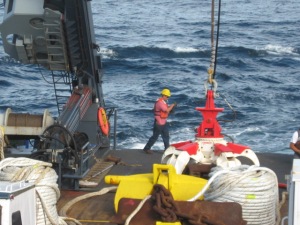 We made it to our destination mid-afternoon. Everyone was scrambling for their life vests and radios. The first thing that needed to be done was to set the anchors and attach the buoys to them. Another lesson I would learn that summer, anchoring is not that simple when you are in 650’ of water. It could and would take hours every time we came to the site. This being our first time, Greg and the crew figured we would do a four point anchoring system. I am not versed in any of this, but by being around and watching it so many times, I have a tiny bit of knowledge about how it’s done. The 2000lb anchors would be deployed in four separate corners of the wreck site. This was done by using the A frame to lift them. Once those were in the water, we would deploy the large buoys which were connected to the anchors. This may seem simple enough to do, but it is quite the opposite. It could be very dangerous. The guys would be on the stern of the ship, Brian would be in the connix box running the controls for the A frame. Gary would be in the pilot house, communicating via radio with the crew and Brian. He would have to maneuver the ship by thrusting it forward a bit or in reverse. They would do this over and over again until the ship was connected to the buoy and in the right spot. When you have any kind of wind, this process could go on for hours. That first time, it did take the crew many hours setting everything up. Though they had discussed how it would be done, there was still a bit of a learning curve. Another lesson for me: Mother Nature has a mind of her own and there’s nothing you can do about it but wait. After a ten hour ride to the site and many long tough hours of work, they finally came in for dinner around 9 pm. They were dirty and exhausted, but the look on their faces told it all. We did it and we’re ready!