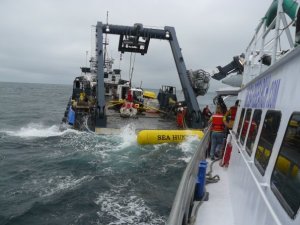 The Sea Hunter out at work. Photo by Dave St. Cyr

In my last post, I talked a bit about my interview with Greg Brooks (my father) and how he goes about locating shipwrecks. Today I plan on continuing that discussion, focusing on tools used and how to be sure that the shipwreck you are recovering contains wealth somewhere onboard.

One of the most important aspects of recovery is trying to pinpoint the age of your intended target, and then using that information to narrow down which ship in history it might be. This is made easier when fishermen, divers or other ocean explorers come forth with an object they found while out working. Sometimes fishermen pull up anchors, pieces of rigging, cups, plates or other relics from ships. Some of them would come to Sub Sea Research, wanting to team up or just give the company some information that could be of use. Once these objects were brought to my dad and his company, they would be able to date the objects, cross-referencing this with what ships from that period had sunk in the area. Many times the places where the objects were found would not be in the immediate vicinity of the ship they came from, so the crew would have to expand their search to a radius outside of the area where the object was discovered. In that case, it was important to learn whether any of these ships had previously been salvaged, because that could account for things having been moved around.

Older ships, from the early 1800s and before, can be discovered with the use of a magnetometer. The magnetometer will pick up on ferrous metals, which is necessary in this situation. Ships from this period were made of wood, and fall apart underwater over the years. It would be nearly impossible to just use the Side scan sonar, since these wrecks rarely even look like the ships they came from. Sometimes they could be encrusted in coral reefs, or could be so covered in growth that they would appear completely hidden. The magnetometer is helpful only when the shipwrecks are in 75 feet of water or less. Then it will pick up on ferrous metals aboard the ship, such as cannons, anchors or rigging.

If a ship is newer and in deeper water, Side scan sonar is the best way to find its exact placement. Going by the information they’ve gathered about local shipwrecks, their possible placements, and which ones might have been carrying similar cargo, the company’s ship will use a technique called “mowing the lawn”, steering their ship up and down and back and forth in a grid pattern, taking sonar imaging. Side scan sonar can photograph even the deepest ocean floors, having been used in almost 17,000 feet of water before. Covering a distance of anywhere from 100 feet to 6000 feet wide, it is useful in finding the exact location of a shipwreck target. Once the location is procured, the sonar can be used to take a high resolution shot right over the wreck. Then ROVs, divers and grappling claws can be sent down to attempt recovery.

Next time I will explain how these techniques have been used in the Port Nicholson wreck, and the problems that face a wreck that is more than a few hundred feet below the water’s surface.

One thought on “Recovery”