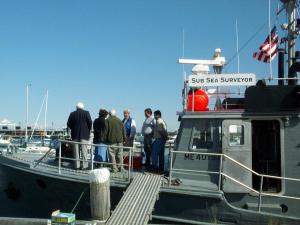 The R/V “7” was nearing the end of its use. Sub Sea Recovery required a ship with more recovery capabilities, and while “7” was good for research and learning it wasn’t the ideal candidate for big recovery projects. In the year 2000, Greg Brooks and the rest of the crew acquired a new vessel, the Surveyor. This ship was 65′ and came from Canada, where it was being used by missionaries to help spread the gospel around various parts of Canada. The group didn’t want much money for it, and so a deal was made. Engineer Brian Ryder went up to get the ship. It turned out that a plank on the bottom was rotted, and the ship almost sank twice on the way back to Maine. Brian got the ship to Boothbay Harbor, where it was hauled out on a rail to have the bottom redone. After a bit more fixing up, the team had themselves a great new ship for local recoveries. Because of its small size, it would be perfect for New England area recovering. They were going to need a larger ship for trips to the Caribbean, in order to ensure they could carry enough fuel, food and equipment. The R/V “7” was donated to a group in Texas that takes kids at risk out to learn about the ocean and teaches them how to operate a ship. It continued to be a learning vessel even after parting with Sub Sea Recovery.

The Surveyor was sent out to Massachusetts, to look at a couple of wrecks near Nantucket and Boston Harbor. They used the Side Scan and located these wrecks, but unfortunately they were buried under a good amount of sand. In order to uncover the sand from the cargo, they would need a propwash deflection unit, which is a type of elbow shaped equipment that is hooked up to the propellers and is able to redirect the flow of water downward to move the sand off the ocean floor. After more research, they determined that the Boston wrecks didn’t carry enough valuable cargo to make the investment of the propwash deflector worth it.

Everyone still had dreams of Haiti and the treasure lying under the sea there. Haiti is where the idea for the company was born, and knowing that there was still untouched treasure out there was a powerful motivator. It would be another year before they could acquire a larger ship that would be able to take them back to Haiti.

It was around this time that the company’s name changed from Sub Sea Recovery to Sub Sea Research. The focus on research over recovery didn’t mean that they wouldn’t still be going out and excavating things from the ocean, but it did mean that they were becoming experts at refining the types of wrecks they chose to recover. Refining would happen through careful study, diligent exploration of sources and facts, and through this research the certainty and confidence necessary to attain the artifacts would come.

2 thoughts on “Recovery and Research”