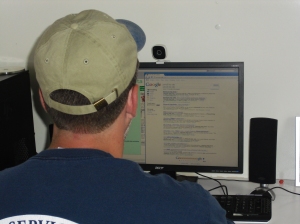 For the remaining days of our first summer working the Port Nicholson shipwreck, we went back and forth from Boston, Provincetown and our site about half a dozen times or so. We would get a favorable weather forecast and many times it would completely change once we were on the site. It was very frustrating, not to mention extremely costly, but you can’t control Mother Nature.
It was great on those few times that we got a break. We would get to the site and it would be as calm as a lake and we were able to hook up to the buoy with no problems. When that happened we were all excited and relieved, as we knew that gave us more time to actually fly the rov (remote operating vehicle). Kevin was the rov pilot and had spent numerous hours practicing on the company computer. He had to be able to work the controls all while watching a monitor. The monitor showed live footage of the rov while it traveled the 650’ below the M/V Sea Hunter towards the ship wreck . Alongside him were Brian and Alex. They would all be housed in the rov trailer for hours. Each would be watching different monitors searching through the unclear waters for anything from finding a way into the ship or the scattered debris outside the ship. It was tedious work but they loved doing it. There were three or so of the crew that were part of the tether team. Their job was to lower the rov into the water without damaging it. The rov was attached to a 1000’ or so of hose. As it was released into the water, one of the guys would wrap a zip tie every so many feet. This would allow them to know how many feet of hose was already in the water. Depending on the current it could take up to a half hour or so to reach the destination.
Outside of the rov room was a smaller area that Greg had hooked a monitor up to. It allowed those on the rov team and others to watch the exact same thing as the crew inside the room. Not being a diver or watching many underwater shows myself, I found this to be both fascinating as well as educational. Some of the marine life that deep was almost prehistoric looking. We would see large crabs crawling on the bottom of the ocean floor as well as huge shrimp. On many occasions we would encounter giant fish that were curious. They would swim right up to the rov and sometimes try to nibble on it. You could actually see right into their black eyes. It was very creepy.

On one of these missions, the rov had been in the water for a few hours and things were going well. They were hoping that they would be able to get four or five more hours in, when the weather (of course, it’s always the weather) started picking up. It’s amazing how it can go from one extreme to another in a blink of an eye. Greg and Gary decided they needed to abort the mission and bring the rov back to the surface. They called to down to the rov room and told them of the decision. Kevin figured this would be the case, as he could feel the pull and tug of the rov. As the tether team got prepared, Kevin slowly started bringing the rov up from the bottom. As he was about 50’ or so from the top it was getting harder and harder to control it, like it had a mind of its own. We were all watching overboard as he worked the controls. Then a couple quick rollers came in and the hose got tangled, it wouldn’t budge. With a half a million dollar piece of equipment hanging in the balance, I was thankful it wasn’t me who was responsible for it. I probably would have panicked and lost it, but they all kept their cool while they formulized a plan.
The plan was for Gary to suit up and dive into the rough waters while Dennis drove Mini Me (ship’s tender) and try to figure out how to untangle the hose. This would be a dangerous mission but fortunately Gary and Dennis were experienced divers and thrived in those kinds of conditions. Once in the water, Gary discovered the hose was tangled in the wire rope of the starboard bow. He had to go under the ship, untangled the hose and wire all the while being careful not to damage the rov. The waves were bouncing him up and down as he worked the wires. We were all holding our breaths as each moment passed. Though it took about a half an hour or so, it seemed like an eternity. I am sure a lot of prayers were said in that time. He finally emerged and gave us the thumbs up sign. In the process of saving the rov, Gary’s wrist got caught in the rope. Again, he remained calm while working the rope free of his wrist in the turbulent waters. He was extremely lucky he didn’t break it or something worse. He ended up with a very swollen wrist for a week.
Once the rov and the guys were safely back on board, you could almost hear the huge sighs of relief from us all. We could finally take a deep breath and relax. A crisis was diverted and no one was badly injured. High fives and slaps on the back for a great job by the crew of the M/V Sea Hunter!