People always ask what we do when we aren’t out on the site but sitting at the dock. Most figure there isn’t anything to do but just hang out (wouldn’t that be great). I probably thought the same thing prior to my coming aboard the M/V Sea Hunter and Son Worshipper. Well, let me set everyone straight, there’s a million things that need to be done while at the dock. 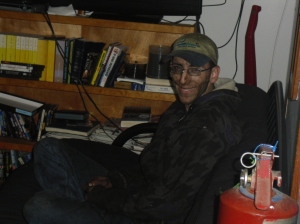 First and foremost, there is always maintenance. Both ships are fairly old so many of their parts need to be worked on or replaced. The engine room is a constant, as it holds all the things that make the ship run (engines, generators, etc.). The chief engineer, Brian Ryder and 2nd engineer (we’ve had a few, but most recent is Nick & Eddie, who also happens to be a great cook) are constantly working on something. Whether it’s changing oil (big ships require a lot of oil) checking the water levels or fixing a busted hose, it is endless. They spend hours each day in the hull of the ship (the engine room) where it’s dirty and loud. Eddie and Nick would emerge looking like they came out of a coal mine. They are usually covered in soot and grease. I don’t know how they do it, but thank God they do it as the ship would fall apart without them.
Then there’s the reviewing of the many hours of video that was taken during the rov flights. Each time the rov goes into the water it records everything around it. Though the team, Kevin, Brian and Alex are watching it while it’s actually happening, there is too much to see and a lot to miss. So they go through it meticulously to catch whatever they might have overlooked. It all looks the same to me, but it is amazing how they can catch the smallest things. Like when they saw the outline of the name of the ship, Port Nicholson. When they asked me to look at some footage and tell them what I saw, I was blank. It didn’t look like anything in particular to me. But through the murky waters they pointed to an image and it became as clear as day, the name, Port Nicholson, was spaced perfectly across the side of the ship. Good thing they are so dedicated to this tedious work, because if it was left to me I might miss a giant ingot.
As I mentioned before, both ships were fairly old, so not only did they require mechanical upkeep but they required interior upkeep. When the M/V Sea Hunter was purchased, the crew did a major overhaul to make her livable. Having lived and worked aboard her for months, we decided she needed a bit of a makeover on the inside. Gary (captain) was the resident carpenter aboard. He would usually enlist the help of Matt, Nick or Zach. Having done work on his own boats or building houses throughout the years has helped. They completely remolded the bridge of both ships as well as some of the cabins. As nice as it all turned out, nothing compared to the remodel of the galley. Since I spent the majority of my time there, I truly appreciated it. Where it originally had faded and had old cabinets, torn up floor and scarred counter tops, it was transformed. Gary and the team installed new and more modern counter tops, resurfaced cabinets and added a nice tile floor. But let me not forget the best addition to the galley’s makeover….A dishwasher! I was the resident dishwasher and was constantly washing endless dishes by hand (remember there were about 15 aboard) so this was a huge treat. It turned out to be not only functional but beautiful.
Let’s not forget about the constant chipping and painting. The salt water is not a friend to steel. It was an ongoing battle to keep the ship looking good. Painting was bad enough, but even worse was the needle gun. It’s a tool that has heavy medal prongs on its end and once it’s turned on it spins very fast. You have to hold it tightly against the steel while the prongs loosen the rust. It is so loud you can hear it inside the ship. Some of the guys won’t touch it, but there were a couple that will stand for hours (Norman and Gary) while it screeches and vibrates until their arms go numb. Thank you to those who do the dirty work and help to keep her looking good. 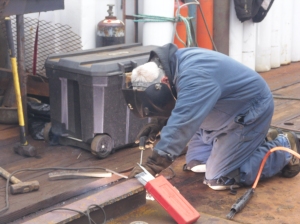 Then there is Dave St. Cyr, our resident welder and photographer (alias Eduardo). He can fix, repair or make new just about anything. Someone would go to him with a job, they would draw it up on paper and away he would go. I can’t tell you the number of times he constructed a ramp (needed to get on and off the ship) and had to tweak it for one reason or another, but each time he improved upon the last. The current ramp has side handles that allow you to hold on as you pull yourself onto the ship when it is at a steep angle due to the tide. It is perfect.

Then of course there is always the absolute dirtiest of them all, Humphrey (the ship’s sewer system). It is where all the bildge water and waste is stored. Just like in a home it sometimes gets clogged and needs cleaning out. Nick Snyer and Cody LaChance are usually the two that have that honor. As a matter of fact, the very first day Nick was hired he spent it in the bildge unclogging the system. If that isn’t dedication to the team, I don’t know what is. But these two guys suit up and with a joke do what others would never do. A gigantic thank you is always there for a job well done. 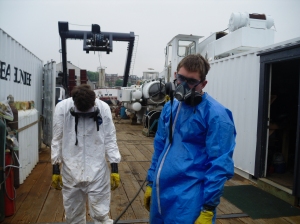 Nick and Cody happy to do the job lol

One of the things I find amazing about this crew is that each one of them don’t only do the job they were hired to do, but do whatever it takes. So, the next time anyone wonders, why aren’t they out at the site (Mother Nature), what could they possibly be doing at the dock?  Just remember, there are a million and one more things that need to be done!