I must say, that first summer aboard the M/V Sea Hunter was the best! It was truly a life changing time for me with so many new and wonderful experiences. Though I worked hard, missed my family and friends and at times was a bit overwhelmed, I wouldn’t trade it for the world. How many women over 50 get the opportunity to? 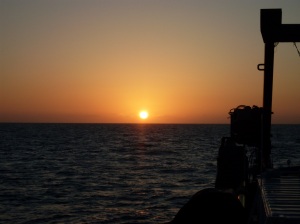 A breathtaking sunset while anchored in the middle of the ocean. Priceless!!

– work and live aboard a 220’ treasure hunting ship that is seeking one of the richest finds ever
-be part of a crew seeking a shipwreck from WWII, sunk by a German U-boat
-meet and work with so many interesting, talented and fun crew members
-gaze into the sky with a million stars, while anchored in the middle of the ocean
-be docked in Boston harbor with a view to die for
-eat striper and lobster that was caught within hours
-have the opportunity to work with your older brother and really get to know one another as adults
-learn new skills I never would have gotten to learn elsewhere
-be filmed and interviewed by both the local media and the Discovery Channel
-realize that I am much tougher than originally thought 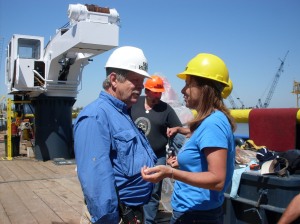 Greg and I working together aboard the M/V Sea Hunter

I was counting my many blessings at the end of my first summer. A few short months prior, I was living in Portland, ME with a small cleaning business and bartending on the side. I was at a pretty good place in my life and didn’t have many complaints. Little did I know that the future held so much more for me to experience and to be part of.
Never thinking it could get any better at the end of my first summer……..I receive a call from Kathy and Greg to meet with them at their house. I figured it was no big deal. Many times I would stop by to pick up a part or something that needed to be taken to the ship, so I went over with no expectations.
Within seconds of seeing them, I immediately knew something was up. They both had huge grins on their faces. In true Greg form (not one for details, just right to the point) he just says nonchalantly, “Do you want to accompany Kathy on a research trip to England?” What? Were my ears deceiving me? Did he just ask me if I wanted to go to England? I was floored, in a million years that is not what I expected him to say. At first I thought he was kidding, but knowing Greg like I do (he is my brother) I knew he wasn’t kidding. “Hell yes” I screamed. Of course I wanted to go to England and who better than with my fabulous sister-in-law Kathy. I gave her a big hug as we both jumped up and down like kids.
As I got in my car to drive to the ship, I too, had a huge grin across my face. I was going to England to do some research at the National Archives. This was a dream come true. I couldn’t think of a better person to go with than Kathy. She has been married to my brother for over 30 years and they have one of the strongest relationships I have ever seen.
Kathy came into this loud and a bit obnoxious family with sweetness and grace. In the beginning, it was difficult for all of us to believe anyone could be that easy going. We thought she must be putting on an act. But throughout the years and the many crazy situations that arose from a family of eight, I never once saw Kathy lose her cool. She remained level headed, fair and always ready to help in any way she could. She and I have shared a spiritual relationship over the years and Kathy has walked the walk, where I have waivered at times. She is truly one that practices what she believes. Kathy is the real deal and I was ecstatic to have the opportunity to experience this time with her.
The trip was scheduled for early October. This only gave us a few weeks to get ready and every girl knows what it’s like preparing for a trip. I immediately made a list (I live for lists) and went over it with Kathy’s list. This way, we each brought things that we could share (i.e. hair dryer, curling iron, etc.). I think we emailed or called each other every day to remind or ask a question of the other. We both were counting the days until we left.
I also did some research online about London, the National Achieves and Kew (the area we would be staying). With each new bit of information I learned, it made it even more exciting. I had to pinch myself each night to make myself realize it was really happening. As I would drift off to sleep, I would say to myself, “Goodnight and Cheerio”.