Approximately eleven months ago we hired our youngest crew member, Nicholas Grass. Although I knew his age before we met, he looked younger the first time he stepped aboard the M/V Sea Hunter. With a thick head of curly black hair, handsome features and a big white smile, I just knew he would do fine!

The only experience Nick has ever had on the water, besides taking a cruise with his family, was when he graduated from the Commercial Diving Academy in Jacksonville, Florida. That was all it took…he was hooked and knew he wanted to find work on the ocean. It just so happened that his father’s friend was visiting and mentioned he had just read about a huge treasure found in a shipwreck off the eastern coast. Nick decided to do a little online research and came across Sub Sea Research’s website. He read the entire site and was fascinated. Seeing they were accepting resumes he decided to submit his, though he knew there was little chance of being hired.

From the first day he stepped on board, Nick is like a sponge, learning new skills and soaking up knowledge from the more seasoned crew. Hired as a deckhand, he is responsible for helping to keep the deck squared away. This may entail securing all lines, putting away tools and making sure everything is secured. Nick also does some fabricating and welding when needed. He is meticulous when it comes to his dive gear as he wants to be completely ready if and when he is needed to jump into the freezing cold waters to salvage something.

Being in the galley most of the time, I had the opportunity to observe the crew at work. I can honestly say that Nick Gras is a very hard worker and is eager to learn new things. The first time I saw him emerge from the engine room I thought he had rolled around on the greasy floor as he was covered from head to toe. However, since then I have learned it is because of his dedication to hard work. Nick’s best and worst experience occurred while at sea. It was three days of nonstop work and little sleep when Nick actually fell fast asleep for about an hour while actually standing up! He learned about hard work and dedication on that trip.

Nick is a bit shy when he first meets you and spends most of his off time alone either working out or playing video games. Being from northern Maine I would have thought he would want to be out and about in Boston, but Nick is content spending his time on the ship. When the weekends come and the ship needs coverage, he is usually the first to volunteer, allowing the rest of the crew to go home. 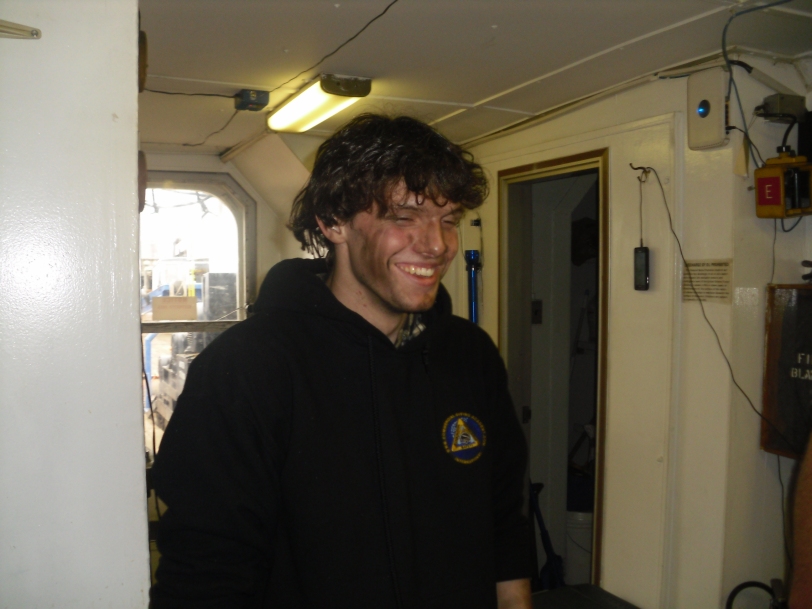 Covered in grease and still a smile

There is no doubt how much he loves his family. His parents have visited the ship a few times and you can see the pride on their faces. His mom is a wonderful baker and is always sending homemade treats to share with the crew. Nick’s plan with his share of the money is to pay off his school loans, help his family and give to those less fortunate. The rest will remain in the bank. More important than money to Nick, is building his character and that is done through hardships and learning. He continues to work on both.

Each day is an adventure, and though he loves working for Sub Sea Research, Nick’s dream is to work offshore for an oil company. He loves the thrill of putting on his dive gear, jumping into the water with only an umbilical cord and knowing his life is in someone else’s hand. Nothing could be better and I have no doubt whatsoever that Nick will one day realize his dream.